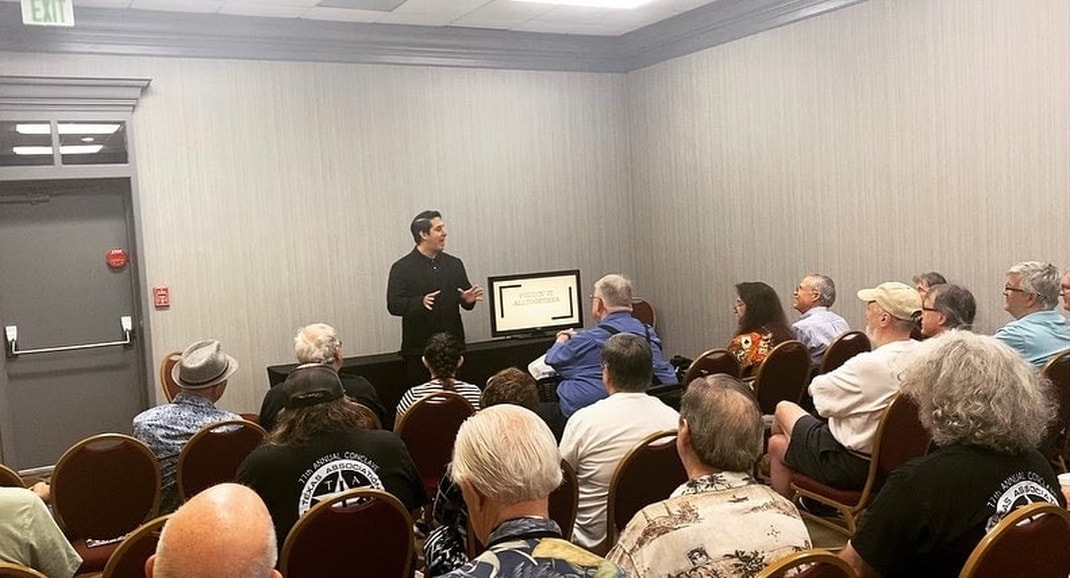 A Modern Day Lecture
One of a handful of lectures to have ever received a standing ovation in the history of the TAOM, Fabian's Puddin' Head Lecture focuses on the paths and detours we often take en route to our final destination. Where does one begin in the construction of an effect? What does it mean to effectively curate your material? How does one convey meaning within performance? Answers for each of these questions and more are suggested while being punctuated by hard-hitting and fooling pieces of magic taken directly from his working repertoire in hopes of having you put it all together.
A sampling of featured material includes . . .

An Advanced Hands on Workshop
​Limited to only a handful of attendees on a first come, first served basis, the Mumblin's Workshop is an opportunity for participants to receive hands-on instruction on advanced, unpublished material NOT included within Fabian's traditional lecture. In sharing material culled directly from his working notebooks, Fabian will share his thoughts on how the term of "Advanced Card Magic" isn't exclusively based on technically demanding sleight-of-hand, but rather as a mindset for recognizing and developing well-constructed card magic. ​​
Pieces to be featured include . . .
Please Note:
​The Mumblings Workshop is an extra charge event and is not included with lecture registration. Participants will receive a set of lecture notes covering the material to be featured within the workshop free of charge.

A rare breed of performer comfortable both close-up and onstage, Fabian has spent the last ten years performing for some of the finest universities, corporations, and luxury groups throughout the country. His attention to construction, presentation, and execution of effect, along with his understanding of the historical and cultural relevance of magic today, has quietly caught the attention of some of the biggest and most obscure practitioners within the industry. His Puddin' Head Lecture and Mumblings Workshop are his first in-person offerings to the magic community.

"Fabian is a master of his craft.  His flawless technique and his ability to pinpoint the strongest material to perform, makes him not only a joy to watch but an incredible teacher. " - Dan White
"You entertained a room filled with people using just a deck of cards. That's incredibly difficult to do. You did it exceptionally well! Congratulations, young man!" - Barrie Richardson
"Fabian understands the difference between doing magic for people and doing magic with people. Everything is carefully constructed to connect and engage with an audience, charming and delighting them before gently knocking their socks off."- James Alan